Who was the apostle Thomas accountable to when he went out as a missionary to India? What about the other eleven apostles? You might think it was James and the church of Jerusalem (Acts 12:17; 15:13-29), but before we overstretch the analogy: do you honestly think that scenario bears any resemblance to how denominations today are governing their missionaries? I don’t. Thomas was only accountable to Jesus.

Assuming that Thomas was sent out after being prayed for at Jerusalem, and assuming he left with their blessing, and assuming still that they gave him a letter of encouragement to bring with him as he departed. Thomas would never be seen or heard from again. Sure, the story of his martyrdom made it into our church history books, so someone who was with him must have come back to the church in Jerusalem, to report everything he accomplished among the Hindus. But is this what we see, for example, in modern American denominations? This sort of hands-off, free to come and go as you please, missionary idea? Not at all.

Suppose it was simply a lack of technology and transportation. Maybe if James had the internet, a train, or a plane, he would be able to follow up on Thomas in those remote jungles. But he couldn’t. Maybe that would have helped out; and in keeping the lines of communication more open, there would have been no martyrdom of Thomas.

Or, maybe Thomas, like the apostle Paul, was simply guided by the Holy Spirit; and he preached and healed and went where the Spirit led him; and there were no controls, no reports to be made, no interrogations from authoritarian church leaders, no pressure about growing church numbers, and no business meetings about church property.

Maybe this is what we need: we need godly leaders in the church who are led by the Holy Spirit and who send out their missionaries as trusted friends, and Spirit-led brothers guided by Jesus. Who are they to tell them where to go and when and what to preach and do? That is God’s agenda.

I am not sure what his historical sources were in the Middle Ages, but we have the story of Thomas in Jacobus de Voragine’s The Golden Legend. It states that he was led by visions of Christ to go to India as a palace builder for one of the king of India’s servants. The king of India left on a two year leave, intending to return when the palace was complete. During this two year leave of absence, Thomas preached the Gospel and converted multitudes. He prayed for the sick and people were healed by the mighty power of the Holy Spirit; and there were open visions and flashes of light from the power of God. If I am not mistaken, there was also a time when he cast a demon out of an idol and it visibly came out, and people could see the monster.

Foxe’s Book of Martyrs says that Thomas preached the Gospel in both Parthia and India, where he eventually excited the “rage of the pagan priests” and “was martyred by being thrust through with a spear.” 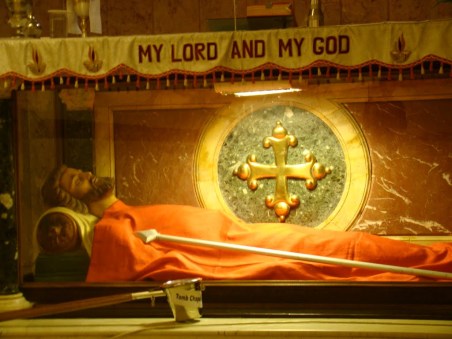 One further thought: In 1 Samuel, we see that God’s method of government is theocracy (or government by prophets called judges). Now, I understand that in 1 Corinthians 14 it says that prophets are not perfect and they need to be evaluated and judged. But God wants church leaders (and civil leaders) to obey the voice of the Lord. Jesus is the Lord God and king of the church. It through obedience to His voice, dreams, and visions that the church should be governed. This does not mean, however, that pastors are unquestionable. This doesn’t mean that prophets are unquestionable. It means that church leaders (which 1 Timothy, 2 Timothy, and Titus call “pastors” and “deacons”) NEED to have the gift of prophecy operating in their lives. It is only in this way that churches can avoid the trap of being led by man-made ideas. Am I saying that charismatic churches need to be led by unquestioning submission to prophets? No! Those who follow John Bevere’s Under Cover (esp. Part 3) teaching have tried this and have resulted with the error of authoritarianism (unquestioning obedience, even when the pastor is morally wrong). I am totally against that idea. It presents a false view of obedience and rebellion.

I favor the view of church government that John Wesley’s Methodist Episcopal Church had. There is no question that Wesley and the early Methodists had the gift of prophecy among them, with dreams, visions, and voices of the Holy Spirit. Supernatural church leaders are also expected to pray for healing effectively (Jas. 5:14-16). John Wimber’s Vineyard, theoretically, takes this view of church leadership. Authoritarianism is a sin. Evil is a sin. Rebellion, properly defined, is opposition to God’s commandments in the Bible, not opposition to men’s ideas. So far as a prophetic pastor and his prophetic deacons are walking in the Holy Spirit, are vigorously striving against sin, resisting temptation, and growing in obedience to God’s Word–loving and gentle and friendly, but firm with sin–these are the men we need to lead our churches!