Fire and Brimstone in Hell

Upon the wicked He will rain coals; fire and brimstone and a burning wind shall be the portion of their cup.  –Psalm 11:6 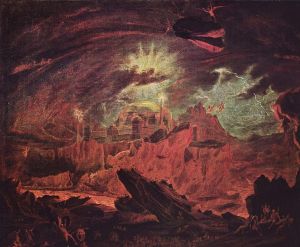 Gasping for breath, sulfuric gases, thick smoke, its hard to breathe.
Millions screaming, millions burning, demons in power–tormenting others.
You want die, but you cannot, and know that it will be forever.
It goes on, because in life you rebelled against the Law and Gospel.

This is reality now for millions in Hell. They are under the eternal wrath of God; it is their portion to suffer forever in conscious torment. Punishment for their sins, and according to the measure they sinned. Essentially it boils down to this: in this life, up here on the Earth where they once lived–God gave them freedom to choose between good and evil. His Spirit was ever present in times of need, to give them grace and perseverance, to follow the straight and narrow way that leads to life by Jesus. But these damned, wretched, doomed, children of the devil were sentenced to Hell after they met the Judge of all the Earth (Hebrews 9:27). He rendered His judgment according to what was right and good, according to His all-knowing and all-righteous judgment: His name is Jesus Christ, the Son of God (Romans 2:16).

These doomed people have several things in common.

Firstly, God calls them “the wicked.” This is because they are entirely evil in every sense. As those who practice Wicca, which is the origin of the word wicked, they are in total rebellion against God, as witchcraft certainly is a rebellious sin. “Rebellion is as the sin of witchcraft” (1 Samuel 15:23). So the wicked, or Wiccans, for we may lump them all together, whether they practiced the sin of witchcraft in the blatant sense of the occult, or not–are all the same thrown into the Hell fire: because of REBELLION. “The cowardly, unbelieving, abominable, murderers, sexually immoral, sorcerers, idolaters, and all liars shall have their part in the lake which burns with fire and brimstone” (Revelation 21:8). Hence, all who are wicked are guilty of witchcraft in one way or another; or in the general sense, rebellion against the law of God; which is SELF-WILL. They are lawless, law-hating people, who continually opposed the notion of obedience to the holy commandments of God. With or without religion, they always managed to reason themselves out of living a devout and holy life.

Secondly, they rejected the Gospel of Jesus Christ. Whether totally or in part, they reasoned themselves out of a full acceptance of the message of salvation as it is in Christ. The Apostle Paul said that this fiery punishment will be rendered to all who “do not know God, and on those who do not obey the Gospel of our Lord Jesus Christ” (2 Thessalonians 1:8). For this reason they are not only wicked in the sense of rebellion, but they are considered “unbelievers,” because they are NOT WILLING TO BELIEVE. Even if they are presented with ever so many convincing arguments in favor of accepting the Gospel of Christ; even if they have no questions or doubts or excuses whatsoever; even if the hard doctrines of evil, pain and suffering, and Hell are completely understandable to them; even if Darwinism seems absurd and creation reasonable; even if the Bible seems to them completely able to stand up to the scrutiny and criticism of skeptics–even if they have no reason whatsoever to be non-Christians: they have this one thing left:–THEY DON’T WANT TO BELIEVE IN JESUS, because if they did, then they would have to live by faith in Him, and that would require repentance, which means giving up their past sins, and resisting temptations for their rest of their lives. But they love their sins, so they instead choose against believing in Christ (hence they are termed “un-believers” not doubters), and sink back into the darkness, and listen to the arguments of anti-Christian skeptics, and comfort themselves with their rebellious anti-Christian rhetoric, enjoying their sinful pleasures all the way to Hell. And if they do not take the route of secular or agnostic unbelief; then they will practice their unbelief under the guise of religious formality: “having a form of godliness but denying its power” (2 Timothy 3:5). They will talk of the love and grace and forgiveness of God, but not live righteously; they will go to church, and do various outward religious actions, but they do not live in a continual state of righteousness in their hearts before God by faith; what really matters to them is their pet sins, whether it be of money, power, sex, drunkenness, etc. However, “he who does not believe the Son shall not see life, but the wrath of God abides on him” (John 3:36). Hell is the place where the wrath of God abides on them forever; and where all His power is exerted against His enemies with fierce revenge. “Beloved, do not avenge yourselves, but rather give place to wrath; for it is written, ‘Vengeance is Mine, I will repay,’ says the Lord” (Romans 12:19). It is also the place where God remembers all the persecutions of godly Christian saints on the Earth, and how harshly the wicked treated them for their faith in Christ. In Hell, the mighty hand of God pulverizes the wicked over and over in fire, forever and ever. He remembers all the times they persecuted true Christians, His dear children; and now, God persecutes the wicked without mercy. The time for mercy has passed for them. In Hell, God gets payback at those who rejected His law, rejected what His Son did on the cross, at those who blasphemed His Word, and those who persecuted the saints of God. Over and over He extended His mercy and Gospel graces to them over the course of their lives; and over and over they rejected Christ–but in Hell, Christ has rejected them; and that is, forever. “The smoke of their torment ascends forever and ever; and they have no rest day or night” (Revelation 14:11). There is no more hope for the damned in Hell.

Thirdly, the wicked are eternally punished with immense torture from the hand of God. There is no question that devils torment the wicked in Hell: “His master was angry, and delivered him to the torturers until he should pay all that was due to Him” (Matthew 18:34). A lifetime of sin and rebellion and unbelief merits an eternity of torment; because the righteous shall live by faith, but not the wicked (Romans 1:17). The wicked do not live by faith, do not trust God, and do not obey the Gospel. So, in Hell they are pulverized by the angry hand of God forever, and rightly so. He gave them their chances to repent and believe over and over and over and over and over; but His “Spirit shall not strive with man forever” (Genesis 6:3); there comes a time when their time runs out: the moment of death; it is then that enough is enough; they meet their God for a brief moment in judgment, and then: “The wicked shall be turned into Hell, and all the nations that forget God” (Psalm 9:17). God has them thrown into Hell (Matthew 18:8-9); and after this happens, they enter that dark land with its glowing fire pits, and are thrown repeatedly into them by devils, except for brief intermissions to be cut into pieces, regenerated, and thrown back in the fire, only to weep and grind their teeth without end (Matthew 24:51); there is no rest from the torments, and it is impossible for them to fall asleep even though all their strength is gone (Revelation 14:11). Not only are they tormented by every device of the devil, and they burn in the fire; but coals of burning sulfur, or brimstone, rain down on their heads, just like it did with the people of Sodom and Gomorrah (Psalm 11:6). Jesus said, “These will go away into everlasting punishment” (Matthew 25:46). Amen and amen.