The Kind of House a Saint Would Live In

There is nowhere in the New Testament that specifically describes how large or how small a Christian’s house should be.

So, is it all a matter of moral relativism? Or are there other ways of determining this?

Let’s compare the size of houses for Prosperity Gospel televangelists with holy saints of church history, and see where we find ourselves. 🙂

THE HOMES OF GREAT SAINTS

1. Apostle Peter (d. 67) – Only the foundation of his house is shown. Archaeologists calculate that his total house size was a whopping 27 square feet! In modern RE/MAX real estate, a house of that size might cost about $26,000: the value of a small vacant lot.

2. Martin Luther (d. 1546) – This is his “death house” which he died in; this would have been the house he would have lived in with a clear conscience toward God. Looks about 2,000 square feet.

3. John Bunyan (d. 1688) – Wrote Pilgrim’s Progress and many Puritan books; he lived in a 2 bedroom house; which, if judging by the picture, looks no larger than 1,400 square feet?

7. Charles Finney (d. 1875) – Leader of the Second Great Awakening; his house used to be on the location of Finney Memorial Chapel. If we were to assume his house was the same width as the chapel (165 feet); and if it were the average height of most one-story houses (20 feet or so); then Finney’s house might have been around 3,300 square feet or less. However, it is possible his house was more around the 2,000s square feet, because most houses are not 165 feet wide.

8. Leonard Ravenhill (d. 1994) – Holiness evangelist and revivalist; in Mack Tomlinson’s In Light of Eternity: The Life of Leonard Ravenhill, there are some pictures of Ravenhill at his house in Lindale, Texas. The clearest shot is from page 459: it was a 2 bedroom ranch, with a small satellite dish on the top, a wooden fence, a small backyard, a woodshed, and a carport; he also had the garage converted into a study room. No more than 2,000 square feet or so. There was also a normally sized backyard; and a Cadillac car.

At this time, I am not able to post the picture from the book, but the type of house similar to the one found here: 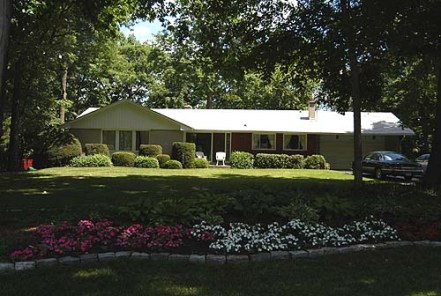 I have reviewed the property size and relative value in American dollars of various saints: the Apostle Peter, Martin Luther, John Bunyan, Richard Baxter, George Whitefield, and John Wesley. Surely these men made it to Heaven! And surely these preachers of righteousness did not consider themselves to be ostentatious, greedy, lovers of money, or opulent, luxury-loving house-worshiping American dream home idolators. They saw themselves as living in modest houses that met their practical living needs. Luther and Bunyan we know were family men, had wives and children; and lived in 2-3 bedroom houses, ranging from about 1,500-2,000 square feet. Follow their examples; imitate them as they imitate Christ! (1 Corinthians 11:1); and you will think about managing your personal finances in a more Biblical and godly manner. In a day and time when churchgoing Christians in middle class America have an almost insatiable thirst for $500,000 – $1 million LAVISH, ELABORATE, EXTRAVAGANT, COSTLY, POSH, OPULENT, LUXURY HOMES, acquired by 25-year mortgages:–it may be encouraging for the faithful pilgrim to know what his economic limitations and financial goals ought to be. It should not be a house and car only; college, insurance, and retirement planning. There is also a very strong need for EVANGELISM and CHARITY to the poor; both of which require lots of money…which could be used, if you opt out of the upper middle class lifestyle of living in a mansion. In real estate, houses cost different based on the quality of the house. If you wanted a quality Luther or Bunyan-sized house, a reasonable cost would be around $100,000 or possibly less.