See also: What is Evangelical Mysticism?

Evangelicalism began in the 18th century revival movements called the Great Awakenings. Jonathan Edwards, John Wesley, and George Whitefield were among the first Evangelicals. They were called Evangelicals, because they focused on the evangelion or the Gospel message. But some of them also had mystical tendencies, or an openness to spiritual experiences, and this allowed revival phenomena to continue in their churches and meetings. I am going to chart some of the prominent figures that come to my mind.

d. 1664 – Isaac Ambrose. I don’t know much about this man. I do know that he was a Puritan, but not the typical rationalistic kind. His book Looking Unto Jesus dealt with the salvation we have in Christ, and practical instructions on meditation and contemplation. The book was highly valued by John Wesley, Leonard Ravenhill, and other great preachers. See Tom Schwanda’s Soul Recreation: The Contemplative-Mystical Piety of Puritanism (2012).

d. 1691 – George Fox. The founder of the Quakers might very well be the first evangelical mystic in the sense that he was a founder of a Protestant denomination which held onto Puritan ethics, developed an Arminian view of grace, and openness to the experiences of the Holy Spirit through mystical silence. See The Journal of George Fox. 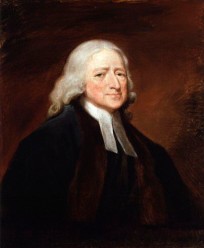 d. 1791 – John Wesley. The founder of the Methodist movement during the times of the Great Awakenings, John Wesley was raised in the Church of England (Anglican). As far as I know, he was the first Evangelical mystic (properly so-called). His background prepared him for it. The Church of England is sort of a cross-breed between the Roman Catholic Church and a Protestant church. Among the Catholic influences, the Anglicans have always had a respect for the Catholic saints, and more of an openness to the Catholic mystical tradition. Because Wesley was raised to appreciate the Catholic mystics, in one dimension or another, when he became a Methodist leader, he naturally imparted whatever level of mysticism he had to the early Methodists. Honestly, I don’t know just how mystical Wesley really was or how much he practiced contemplation. But what I do know is that he was an avid reader. And he was a big fan of Thomas a Kempis’ The Imitation of Christ and Michael Molinos’ The Spiritual Guide (on contemplative prayer). His life was filled with spiritual experiences: see Daniel Jennings’ The Supernatural Occurrences of John Wesley. For more on this subject, see Robert Tuttle’s Mysticism in the Wesleyan Tradition (1989).

d. 1919 – A. B. Simpson. Founder of the Christian & Missionary Alliance. As a part of the Faith Cure movement, he was an advocate of healing prayer like Gordon and Murray, and wrote The Gospel of Healing (1885). He was aware of the history of Christian mysticism, but didn’t seem to be a big fan of the mystics–as he was very conscientious not to fall into their errors. But he was influenced by their concepts of the “mysteries” of God, and thus read the New Testament through such a perspective. He was very Bible-oriented and Evangelical, but still had a slight leaning towards the mystical. It appears at one point in his life when he had a psychotic episode, he saw an angelic star appear in front of his face. See also Paul L. King’s Genuine Gold: The Cautiously Charismatic Story of the Early Christian and Missionary Alliance (2006). [see also Clyde McLean Glass’ “Mysticism and Contemplation in the Life and Teaching of Albert Benjamin Simpson”]

d. 1922 – William J. Seymour. A primary founder of Pentecostalism. Seymour was influenced by Charles Parham, who had a Quaker wife. But it was Seymour that God used to bring the Azusa Street revival of 1906; and hence spread the Pentecostal movement all over the world. Seymour was a Holiness preacher and was impressed by Parham’s teaching and experience of tongues. It was the spreading of this gift of tongues, the presence of God, ecstasy, physical manifestations of the Holy Spirit, healings, prophecies, and miracles that characterized the Pentecostal movement. But because of the novelty of tongues, most people focused on it. Nevertheless, Seymour and the early Azusa Street people practiced contemplation, but they called it “tarrying” for power from on high, like in Acts 2. Before giving a sermon, Seymour would put his head in a box and contemplate God until he heard a word from Him. The outpouring of God’s power and miracles were so amazing that black people, white people, and non-Christians were attracted to the meetings. But among the Christians at Azusa Street, it is said that “the color lines were washed away in the blood.”

d. 1963 – A. W. Tozer. An influential preacher in the Christian & Missionary Alliance. He is “the grandfather of Evangelical mysticism” in the modern sense. He wrote The Pursuit of God (1948), which influenced Richard Foster and many other people in the Charismatic movement of the 1970s and on. Although Tozer’s classic book is sort of hard to understand because of his extremely educated selection of vocabulary words, in it you can see a man that had a high regard for the Catholic mystics, holiness, humility, detachment from possessions,  contemplation, and hearing God’s voice. See E. Lynn Harris’ The Mystic Spirituality of A. W. Tozer (1992)–might be hard to find at an affordable price, though.

d. 1997 – John Wimber. The founder of the Vineyard churches. In the late 1970s, Wimber had Bible study groups at one point in a Quaker church, and at another point with a Calvary Chapel church. But because he moved in the direction of miraculous gifts in his church meetings (1 Cor. 12:8-10), he was excluded from both of these groups. He went on to join the then forming Vineyard church in a home. Eventually, Wimber rose to be a prominent Vineyard leader. And when Richard Foster’s Celebration of Discipline (1978) came out, he ate that book up! Contemplation and spiritual experiences were important to Wimber, but especially divine healing. He wrote two books on healing: Power Evangelism (1986) and Power Healing (1987).

John Crowder’s “Possible” Universalism:
A Liberal, Not an Evangelical Mystic

Author of Miracle Workers, Reformers, and the New Mystics (2006) and The Ecstasy of Loving God (2008)–for a while I put him in the Evangelical mystic category. But later I progressively became aware of some universalist tendencies in his thought; then I became alarmed; and I fought within myself over this. Now I am sure Crowder should repent from his “trinitarian universalism,” if that’s what you want to call it. The best representation of his views on this subject are in the YouTube video: “Hell Revisited – The Jesus Trip.” (August 16, 2012). The following are chronological notes on this video, and you can see how towards the middle of the video, he becomes more explicitly universalist, but is always trying to avoid a dogmatic Universalist label. He doesn’t like labels. But I do, so long as you explain the meaning; there is truth in that. If I were to label him, he is an “almost Christian universalist” or perhaps a “wannabe Christian universalist,” but he just lacks full certainty about it at this point in his life. Wikipedia summarizes concisely Crowder’s stance with Barth: “While Thomas Talbott, “Gregory MacDonald” (the penname for Robin Parry) and Eric Reitan regard everlasting punishment as impossible,[11][13][33] Reformed, neo-orthodox theologian Karl Barth and Catholic theologian Hans Urs von Balthasar believed that the eventual salvation of all was merely a possibility.”[34]

Crowder claims not be a universalist.

Crowder says Jonathan Edwards’ “Sinners in the Hands of an Angry God”—that the title of the sermon makes you want to vomit. (I am a Jonathan Edwards fan for several reasons, not the least of which was his elaborate theology of Hell.)

Crowder denies that God hates the wicked, because “God is love.”

25:00-26:00 goes in the universalism direction. He extends universal atonement to mean that every man has been atoned for automatically (whether or not individuals come to personal repentance and faith in the cross).

31:00ff – Crowder believes its possible people in Hell “under the earth” will all truly worship Jesus and be saved (universalism).

31:55ff – Crowder quickly retracts by saying, “I am not a universalist…but I do have hope.” But terminology will not save him from the universalistic interpretations of Scripture to which he obviously holds (or leans toward). To believe anyone is saved from Hell, after already having been condemned there, is not the Arminian view of unlimited atonement; it is Christian Universalism.

34:00ff – Crowder says the reason why he is not a “Universalist” is because he’s not dogmatic about it. He claims a certain level of agnosticism or uncertainty about the universalist revelation. He’s a “hopeful universalist,” but not a dogmatically, absolutely sure, card-carrying Universalist with a capital “U”.

38:00 – “I am not saying that all roads lead to Rome” (that is, he’s against religious pluralism, or the John Hick view).

39:00 – “I actually do not vilify Christian Universalists as ultimate heretics.” That is, people like Rob Bell (Love Wins).

It is clear that John Crowder rejects the absolute certainty of the Reformed doctrine of Hell as an eternal conscious punishment in fire. By saying this and many other things in this video, Crowder obviously would reject Westminster Confession, ch. 33: “Of the Last Judgment”:

The end of God’s appointing this day is for the manifestation of the glory of His mercy, in the eternal salvation of the elect; and of His justice, in the damnation of the reprobate, who are wicked and disobedient. For then shall the righteous go into everlasting life, and receive that fulness of joy and refreshing, which shall come from the presence of the Lord; but the wicked who know not God, and obey not the Gospel of Jesus Christ, shall be cast into eternal torments, and be punished with everlasting destruction from the presence of the Lord, and from the glory of His power.

The Biblical references used in support of this are the following (that is, these references come from the Westminster Confession itself):

Crowder does not reject Hell-fire torments, but he does reject the “eternity” of Hell-fire torments. “I don’t know” seems to be his bottom line. But note the everlasting fire, everlasting punishment, and everlasting destruction spoken of in Matthew 25:41, 46; and 2 Thessalonians 1:9. He would do well to appropriate the truths of Robert Tuttle’s Mysticism in the Wesleyan Tradition and Christopher Morgan’s Hell Under Fire.

59:00 – To the issue of “What of those who have not heard the Gospel?” He again says, “I don’t know.” And he cannot say such people are automatically going to Hell when they die.

1:07:00 – “Everybody is included in the finished work of the cross. Even unbelievers are included in a hidden way.”

Three Mystical Heresies in the Evangelical and Charismatic Churches

Three issues are burning today for Evangelical mystics. Quietism, New Age occultism, and Universalism. We need to be on guard against the errors of Madame Guyon and Michael Molinos. Augustin Poulain dealt with this in his chapter “On Quietism” in The Graces of Interior Prayer. We also need to guard ourselves against New Age occultism. There are many good Evangelical books about this. The best I know of is Clifford Wilson and John Weldon’s Occult Shock and Psychic Forces. And finally, we need to know for sure, that all Universalism is heresy (George Fox, Quakers, etc); and only an explicit faith in the revealed Gospel of Jesus Christ, will effect salvation by faith. A good explanation of this can be found in R. Douglas Geivett and W. Gary Phillips’ “A Particularist View: An Evidentialist Approach” in Four Views on Salvation in a Pluralistic World.